Mod List: (copied from the for sale ad, stuff added by me in red)

first forester story below...
I suppose I'll do one of these, I just got my new (to me) 04' XT running. I bought it off ebay with a bad turbo and had it shipped from New York to California. Big thanks to Sofakinglong for heading over to check it out for me! The first thing I did while waiting for parts to arrive was the DIY Gril Mod, although I'll probably replace the mesh with something better later. I also went ahead and ordered Kartboy short shifter, bushings, and battery tie down. I got a used turbo from another member on here and took a few trips to the nearest Subaru dealership for gaskets, hoses, bolts that were missing from the car. I also picked up some used Megan coilovers and STI front and rear sway bars from classifieds on here. I installed the coilovers along with some Gramlights 57c's I had laying around yesterday while I was flushing the coolant. Last night I started it up for the first time since owning it (about a month including transit time) and this morning I went for a drive. There are a few things to do still but I've got to say I was blown away by how much torque the stock motor has, I can already tell I am really going to enjoy this car. Right now it is in "California mode" but I am planning to move to Romania in the next year and eventually bring this over there, I'll probably raise the ride height and put some all terrain tires on the stock rims before I ship it over. That's about everything, maybe I'll do a turbo swap sometime in the future but for now I'll enjoy it as is...

one of the "important" mods done before it actually runs, haha...

As it sits today, I'll wash it soon, I still have a coolant leak near the turbo to find and address...

I got a new exhaust, yea I know it's a potato launcher. I don't normally go for big loud exhausts but the old one was pretty rusty and I couldn't pass up the great price on all this stainless steel goodness, turns out it wasn't as loud as I thought it would be so everything's good!

The fitment was a little to the left and ended up melting some of my bumper so I made a heat shield/ cover plate out of aluminum and riveted it on. I plan on painting the lower part of the bumper black and will paint this black also so it will blend in more but for now I kind of like the raw brushed look...

Looking forward to pictures when you get your 15 post requirement. :wink:

2004 Forester XT
Joined Oct 29, 2009
·
104 Posts
fixed the leak! turns out one of the banjo bolts on the turbo needed an 1/8 turn more, I love it when it's something so simple. Next up are some brake maintenance/ upgrades, what are some good street pads and stock size rotors for these cars?

and a shot from the beach... 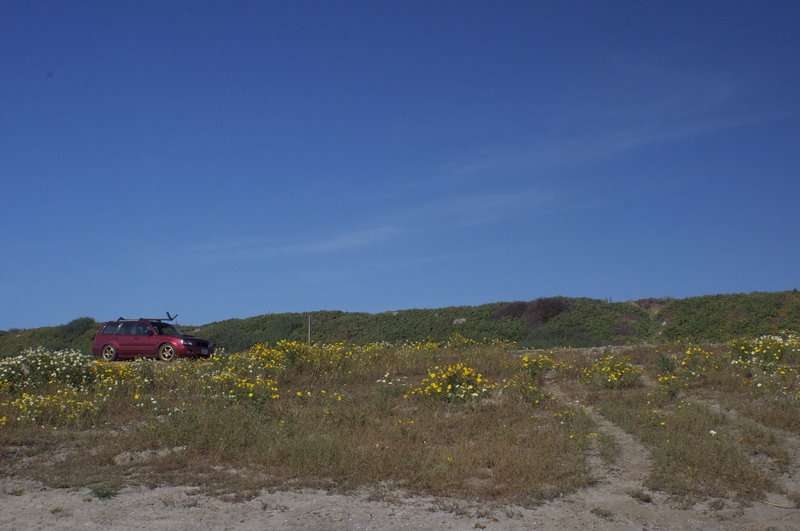 2004 Forester XT
Joined Oct 29, 2009
·
104 Posts
So since I got my Forester I've slowly been convincing my brother in law to make one his next car, it's been working, after a few weeks of searching every online car classified he found a 2007 Newport Blue XT Premium MT with low miles in Salt Lake City, Utah. Two weekends ago, I flew out with him and we drove it back. I love Utah and plan to go back to Zion National Park soon. Unfortunately, I forgot my camera so all we have are Iphone pictures...

He is a member on here already, now he just needs to start a journal, (hint hint).

:(
Joined Nov 30, 2009
·
471 Posts
Your XT is gorgeous! Love the rim/paint combo. The Megan Coilovers sure give it a mean stance
Nice work so far! (and good job on converting the brother-in-law)

2004 Forester XT
Joined Oct 29, 2009
·
104 Posts
Funny Story; I went kayaking at La Jolla Shores yesterday and afterwards met my family and some friends for a beach BBQ. We ate, had a lot of fun and were ready to go home, I decided to pull my car over from the boat launch area to load everything up easier. The sand at the boat launch is pretty packed from cars going in and out of there all the time, the rest of the beach is not! I got about 15' from the launch area and my car just sunk. I know all too well what it is like to get stuck in a vehicle but I turned off the car and loaded up anyway, hoping that it just felt worse than it really was. Got in the car and put it in gear, nope, I'm stuck. First I dug the sand out from behind my wheel so I could just back up to where I came from but my wheels just spinned, luckily we still had a few people/ diggers left so out came the kayak paddles, paddle ball paddles a little shovel that I always keep in my car, and anything else that we could dig with. In about half an hour we had it dug out and I was ale to back out. Moral of the story; lowered on coilovers+bald tires+ deep loose sand= high centered Forester.

Sorry fo the crappy pictures but I was too busy digging to take any quality shots.

notice in the pictures the car seems to have a lot of wheel gap, that's because we dug out the tires first, they just dropped down, the entire frame and body was sitting on the sand, my tires normally tuck in the fenders...

2004 Forester XT
Joined Oct 29, 2009
·
104 Posts
Took a couple of photos with my brother in laws forester, also got an STI style hood scoop, I still am waiting on the paint to really harden up so I can wet sand and buff it so it's smooth...

2004 Forester XT
Joined Oct 29, 2009
·
104 Posts
We went up to the mountains for the day, started off going up Palomars' South Grade and down the East Grade, drove to Sunshine Summit for California Burritos, than went to Middle Peak, near Cuyamaca for a quick hike followed by soda floats in Julian, here are some of the pictures...

Long story short, a lady pulled out in front of me and I couldn't stop in time, no one was seriously injured but my car was totalled. The accident was ruled her fault so I started looking for a replacement. The XT had become my dream car- fast, fun, wagon so I decided to find another one. I wasn't picky on color or year, I just wanted to find something in good condition so I could pick up where I left off on my previous car. I ended up purchasing Lincoln's (StinkyD) forester from the classifieds, (haha, same color and year). My wife and I flew out to Utah and purchased the car and took a mini vacation on the way home. Everything went great till we ran into a clutch issue in Las Vegas and I had to tow the car the rest of the way. Back home, got the issue resolved and I can't be happier with this car. Lincoln had already added a lot of performance mods on it so I've just been doing little things to make it mine. pictures and mod list below...

The new Forester right after purchase next to The Salt Lake...

On the trailer in Las Vegas...

How it currently sits with some of my old cars parts added...

Mod List: (copied from the for sale ad, stuff added by me in red)

Right where you left off!

Yea, but only better! I think I'll eventually get some other wheels and tires, I still have my gram lights but I'd like to get something more aggressive like 18 x 10 maybe.