Joined Feb 10, 2006
·
1,716 Posts
I've been to Penske Subaru twice, sorry... Subaru Orange Coast. Once to order parts, the other to pick them up. It was the one time they beat Irvine Subaru on a price. I usually order Subaru parts though SubaruGenuineParts.com

I laughed a little too loud when they quoted $100 for an oil change.

Joined Feb 10, 2006
·
1,716 Posts
The Ascent is way too big for my family. Plus it won't fit in the garage.
► Show Full Signature
Elem Sch Running & FF Coach.Rental Dog Aficionado

I paid ~$10 for it for a "quality" made in Republic Of China item and it didn't burn down my car during the interim. I guess I cannot complain too much. lol
► Show Full Signature
Elem Sch Running & FF Coach.Rental Dog Aficionado

Before the family road trip I had started a project with the WRX mufflers to permanently seal one of the exhaust ports so it would eliminate the near miniscule off idle boom in the cabin. (Wife's ears, not mine)

After the trip I had forgotten which port was to be sealed. And deciding to skip remounting the mufflers to determine which was the correct port. I went straight ahead into seal the wrong port. :surprise:

- I had mounted the stock mufflers for the trip...

After cutting out the discs to size/shape. I dropped in a pair of the $7 baffles via the slow boat from China on eBay with a dab of JB weld to hold it in place. After letting that cure, I dropped in the discs with a lot more JB weld to seal any gaps. - Success in creating air tight seal was obtained. :woohoo:

After a full cure process and remounting the mufflers I have achieved exactly what I didn't want to happen. That is sealing the incorrect port. :crying:

I say that because the accidental unsealed port received the least amount of air flow routing restriction. (Picture #3)

The port I did seal created enough turbulence in the muffler can, which in a small effect, got rid of the drone and off idle boominess that only the wife could hear.

Because I sealed the wrong port the off idle booming is ridiculous. Once you get above 1k rpm it is fine. And the XT is quite happy. Heck the booming gives me a headache while it is in the warming up process. (Whoops)

My decision in using the 51mm baffles was to eliminate the SS ScotchBrite Scrubber. I didn't know how they'd handle being in a sealed environment over the long term. Plus the angled cup on them helped hold them in place and allowed easier fitment of the SS discs I had cut.

Needless to say these will be going up for sale for cheap. Like in the $25 category for someone else to experiment with. lol That JB weld will not come off willingly. 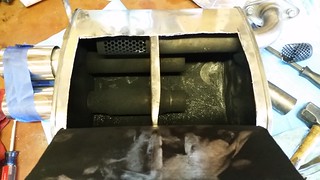 Joined Feb 10, 2006
·
1,716 Posts
Today.... Minion #1 parked his BMX bike into the back of my bumper at speed.... Thought I was getting away with only a ding. But with closer examination the spider cracks have been started. :frown2:
► Show Full Signature
Elem Sch Running & FF Coach.Rental Dog Aficionado

Remapped to the 91ACN HWG version to see how it responds...

HeyChris said:
I know. But it took me this long to save my pennies for the hand me down V2 I picked up.

Trade it in on a V3, believe me, you'll be happy you did.
► Show Full Signature
2009 XTeaser
141 - 160 of 228 Posts
Join the discussion
Continue with Facebook
Continue with Google
or sign up with email
About this Discussion
227 Replies
17 Participants
Last post:
HeyChris 2 d ago
Subaru Forester Owners Forum
We’re the best Subaru Forester Owners Forum to talk about the best years of the Subaru Forester, modifications and reliability history of the Subaru Forester.
Full Forum Listing
Explore Our Forums
Problems, Maintenance, and Warranty Europe Interior and Electronics Members' Journals General Forum
Popular Communities