Hello! I haven't done much yet, but wanted to start logging changes here. I've been a member for a while now, and have browsed the forums quite a bit before even purchasing. This is my 4th Subaru, all 4/4 being WRB (this was not even intentional). I also have a 1967 Mustang that I haven't driven in years and am slowly working to get back onto the road. The Forester was purchased so that I could still have some fun while also being able to haul around things like groceries and camping equipment.

Over the last couple of years, I had been looking out for a manual XT. After having one non-turbo non-AWD Subaru, I was ready to go back, but there just aren't many of these things for sale in Southern California, and the more I looked, the more I wanted a 2007-2008 Sports. Of course, those were the hardest to find. Eventually, I realized I would likely need to settle for automatic and work towards a swap in the future. On the plus side, it's nice that my girlfriend can drive me home if needed.

I purchased my 2008 Sports XT in December 2018 from a forum member. It came with numerous suspension and bushing upgrades, a VF turbo and some 2011 STi wheels with adapters.

Here she was when I got my first look: 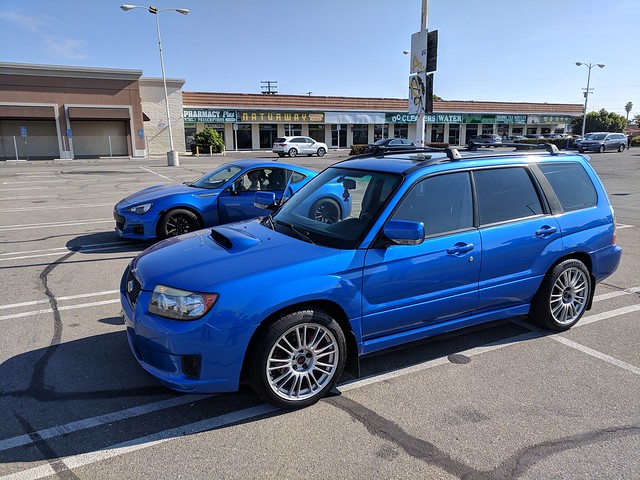 And here's how she sits today (I'll do my best to keep this updated): 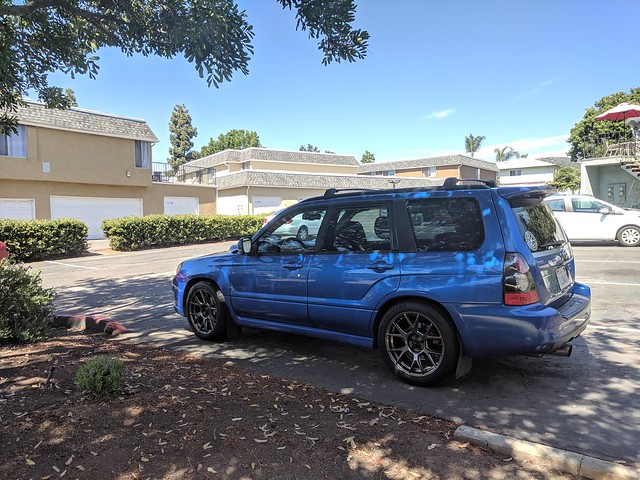 2008 FXT Sports slushbox
Joined Sep 11, 2017
·
64 Posts
Most work on the XT was done by previous owners, but so far I've done pads/rotors, rear strut bar, new wheels & tires, and GS radiator hoses. I also have an SPT front strut bar that I will need to try and fit one of these days, but the studs on the struts are so long that I can't get the damned thing on without lowering the struts a bit. I know there's also a bit of massaging needed to clear the AC lines.

Here's a pic of the other car, just for fun: 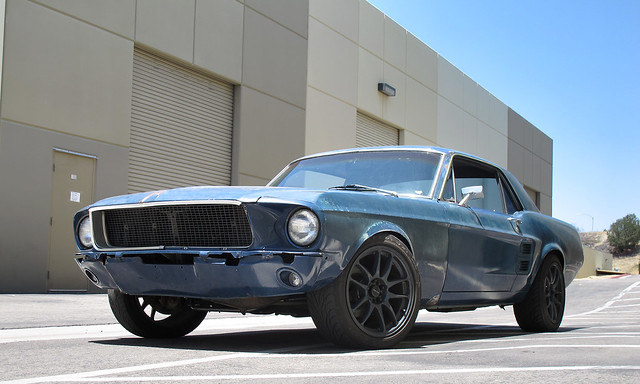 All my previous cars:

When I wrecked my Integra and needed a replacement, I knew exactly what I wanted: a World Rally Blue WRX; I just had to go find one. After that, I wanted something in Aspen White, but the cars I found available just kept happening to be WRB. I'm now resigned to the fact that I'll never own a Subaru of another color. 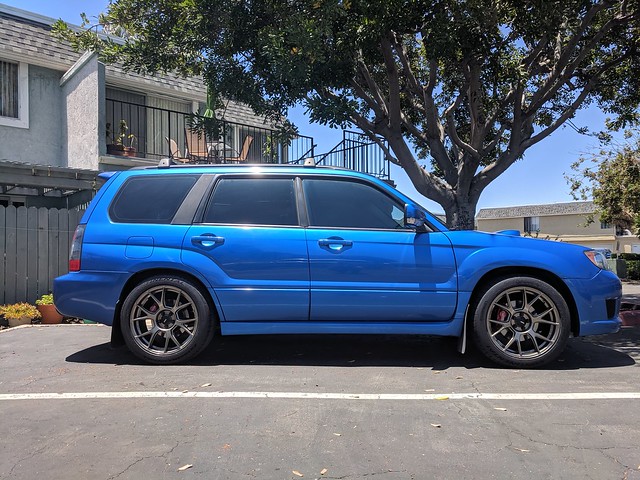 2008 FXT Sports slushbox
Joined Sep 11, 2017
·
64 Posts
I recently had to take the fozzy into a shop to work on the front brakes. I was doing a pad/rotor replacement and snapped a caliper bolt head right off. Had to be drilled and re-threaded. The shop checked the rear bolts and gave me the OK that I'd be fine to swap those out on my own (and save $$).

This past weekend, I went to replace the rears and ran into a couple of other issues. 1) The screws I used to pop the front rotors off don't fit on the rears and those things were STUCK. 2) The new rear pads did not come with replacement retention clips (although the fronts did), and the ones on the car are pretty mangled. The driver's side is just a couple pieces of bent wire.

So, I'll get the proper stuff and hopefully take care of that this coming weekend.

While I was back there, I noticed the rear adjustable sway bar is set at different holes on each side. I'm not sure that it's a real issue, but it bothers my sense of symmetry and I'll be addressing that as well.

I finally did some maintenance on my FXT, as I have a long trip starting this weekend (Southern CA > OR > WA > home). It was 6 months to the day since my previous oil change, and I'd only gone like 2700 miles. I've been working from home since early March, but used to drive around 500 miles per week, so this is just weird.

Recently I picked up a new coolant overflow bottle and hose kit (all OEM). My bottle was disgusting, but the big problem was the overflow outlet from under the radiator cap was spewing when it got hot. I also grabbed a windshield bracket for the HomeLink mirror I bought from a member here, which I was finally able to install.

This past weekend, I checked ATF and front diff fluids. Gear oil up front was beautiful, so I didn't even check the rear (let's be honest, I was lazy and didn't want to fight to get the diff skid plate off). ATF seemed OK, and has about 30k miles on it, but the last AT I owned was over 20 years ago and I never changed that out myself back then. I'll bring some extra fluid just in case, but did not want to deal with the hassle until after the trip.

Air filter was pretty filthy so I ordered an OEM replacement, along with some vacuum/breather hoses that are cracked (connects to the black tube that's bolted to TMIC).

And apparently someone, I'm not gonna name names, did not tighten one of the y-pipe coupler clamps when reinstalling the TMIC. The one you can't reach without removing the IC. And that caused it to throw a boost CEL and the engine shut off after about a 40 min drive, while pulling into a parking lot. WHOOPS. Good thing I carry tools in the car! Easy fix, but boy did I feel dumb. I'll be adding some tools to the kit to make life easier just in case. This will be the longest trip since I got this thing about a year and a half ago and I don't want any surprises.

I also bit the bullet and ordered an Ortiz 3-gauge dash pod, but it looks like that won't even ship until early Oct. Guess I have plenty of time to install sending units and run wiring (boost is already hooked up and stuck on steering column, but it's funky). Depending on what all I end up adding, I may get their instrument cluster bezel that holds a gauge in the lower right. I know they make a dual one, but I think I'd be more OK hiding the 8k+ RPMs on the tach vs. my fuel level on the left. I'll add oil pressure and temp for sure, and possibly wideband AFR if I can get the old busted sensor out of my DP.

2008 FXT Sports slushbox
Joined Sep 11, 2017
·
64 Posts
On a recent drive, maybe 10 min from home, I noticed some smoke coming from under the hood when I came to a stop. Pulled over to check it out and saw some oily sludge smoking on the up-pipe. I immediately went back home and took the GF's car for the errands. After taking off what I could in my tiny garage, I still haven't nailed down the source, but I'm guessing it's the valve cover gasket.

I had to get things back together in time to get smogged and registered, but I found that after driving a ways, the smoke stopped. I've driven only a couple of times this week, but no more noticeable smoke. I wonder if it's due to the car sitting for a while (still working from home) and the gasket gets dried out. At least I passed smog, so I can go back to fiddling with it.

Also did receive my Ortiz gauge pod. Haven't installed it yet, but a couple of things bug me. First, and this is a small thing, but it's chipped on the back (edge pointing to windshield). It probably won't show up when looking through the windshield. But second, two of the plastic screw posts are broken off. Whatever core they used to make this wasn't taken gently from its donor. I did the same thing removing mine, but I also had no idea about the little clips near the hinge. The plate still screws on, but with 2 fewer screws. Probably not a huge deal, but I would have expected them to inspect the donor parts better. I still need to work on the gauge install.

2008 FXT Sports slushbox
Joined Sep 11, 2017
·
64 Posts
The smoking issue has persisted, so I took her up to Metro Performance for a quick inspection. They're positive it's the passenger-side valve cover gasket, so I'm going to have them work on that and install the plugs that have been sitting on my bench for months. Not the cheapest procedure, but I really don't want to deal with this in my tiny garage and I know they'll treat me well. Good folks there.

2008 FXT Sports slushbox
Joined Sep 11, 2017
·
64 Posts
I finished installing all the Diode Dynamics LEDs that I recently picked up from RSD during sales. Just need a few more, but the annoying ones in the headlights are done, as well as rear turn/brake and the map lights. I went midrange on all of them, as I didn't want to go overkill. Just as bright or slightly brighter than OEM. Huge difference on the eyebrow light, especially. I'll get a pic when I can.

I also sanded/polished the headlights. The driver's side came out nice and clear, but I need to go over the passenger side again. It still has a very faint haze over the whole thing.
1 - 8 of 8 Posts
Join the discussion
Continue with Facebook
Continue with Google
or sign up with email
About this Discussion
7 Replies
1 Participant
Last post:
2point0 8 mo ago
Subaru Forester Owners Forum
We’re the best Subaru Forester Owners Forum to talk about the best years of the Subaru Forester, modifications and reliability history of the Subaru Forester.
Full Forum Listing
Explore Our Forums
General Troubleshooting and Technical Help Europe Interior and Electronics Members' Journals General Forum
Recommended Communities