Quadraria10 said:
I know what you mean about the engine, it can sound rough at startup. I only recently learned that mine has a PZEV engine, and that they are programmed to rev at 1500+ when cold to get to temp faster. Its also programmed to idle as low as possible. I have been thinking mine idles too low, but it seems to be the nature of the beast. Cleaning the throttle body with some throttle body cleaner spray was beneficial. Idle is more stable, and the slight hesitation in acceleration is gone.
Changing the serpentine belt isn't so bad and unlike a lot of vehicles its right in front rather than hidden.

With regards to the transmission, I am wondering if the fact that its an older design, means that the same one was used in earlier Foresters and possibly other Subaru models and that it might give you the opportunity to find the pricey parts used. It's rare to have an issue with the transmission control module. You might be able to find one at a pick and pull yard, but you will need to research compatibility.
Click to expand...

About the transmission, I can only hope that the TCM is fine. I'll have a chat with my shop if they allow for salvaged parts instead of their own. The first issue that has to be solved that they ran into in diagnostics was that the sensor that detects whether the transmission and the engine are at the same speed was out by a bit (about 15%). If it comes to replacing the TCM I will definitely look into digging for a salvage part because I sure as hell don't want to waste $1100 on it.
Q

2011 Subaru Forester
Joined 8 mo ago
·
492 Posts
Hopefully, it isn't but if you do have to track down a TCM it might be worth it. I helped my nephew with an Acura EL he bought used that had hit a curb. He did not realize that it would require replacing the crash sensors, seat belt actuators, and the airbag control module. Over 2 grand in parts at a dealer vs 46 bucks at Kenny U pull. Of course, you have to be a bit lucky and find the right donor car. Hope you can find one. For example, there is a 2009 Forester at a Pick and pull yard in Gatineau. It's an automatic and has the same transmission as ours, but of course, we have a different engine, so I am not sure if the TCM would be the same model. It might be though. Some research would be required. Before that, I would have a serious look at the connector for corrosion. For some reason, I am assuming it's under the transmission console. Maybe spilled liquid got in there. If you do have a look at yours post a pic of it, and I will try and research it a bit.

Now the power steering pump is screaming at me when I turn the wheel while stationary. The feed hose to the pump was removed to changed the steering fluid (not by my recommendation) and I'm worried that it's allowed air to be introduced to the system... may need to replace the aging hose. Engine is also making some unhappy noises for a few revolutions after starting from cold but goes completely normal. Also one of the map light switches is messed up and I had to order a new one. I am getting really tired of this car already. It took me eight years to learn to hate my Tribute, and I already hate this stupid thing after one month of ownership.

Also, @Quadraria10 I gotta say, I would love to live where you do where you can get $2000 worth of parts for $46 at a pick-and-pull. The one I have heard back from wanted $65 for the dome light console. Luckily I found a switch that will fit, but I have learned that if anything else big goes wrong with this thing that scrap yards are not going to be an option for me.
Q

2011 Subaru Forester
Joined 8 mo ago
·
492 Posts
Man, this is sad to hear. I guess I have been far luckier. I bought privately and not through a dealer of any kind. I have also been servicing it myself these past 8 months. I used the turkey baster method to get as much new steering fluid into the system I could, and did 3 drain and fills. After changing the driver's side CV axle the car is almost perfect. I did note how cracked the rear bushing on the front control arms are and so I have ordered a set and plan to install them this month. Should make the Foz feel almost new.
For used parts I guess I am lucky that there are Kenny U Pulls in both Ottawa and Gatineau. For a TCM they will charge you the same as for an ECM-- $33.50 with a $10 core so your final cost can be as low as 23.50. They publish price lists and it makes no diff if the part is coming from a Mercedes or a KIA. I like that it allows me to practice the part removal before doing it on my own. Also, a great place to stock up on little trim clips and whatnots which you can usually get for free. FYI they sell the dome light assembly for $5.47. They had an SH Forester in Gatineau not long ago and of course one of the good things is that Subaru uses a number of interchangeable parts across different models.
I am not so keen on more traditional junkyards that seek to charge a high percentage of the dealer part price, but then that requires more service and knowledge which I guess you have to pay for somehow.
The breakdown for my nephews Acura was the SRS Airbag control module at Honda would have been over 900 Cdn, driver's side seat belt and buckle units over 650 and two front impact sensors over 300. Throw in taxes and its over 2K. At Kenny U Pull I paid the same for the SRS control module as an ECM, a bit less than 20 for the seat belt, and they let us have the impact sensors for free.
I hope you can get yours sorted out soon. Good luck with it.

2011 Forester 2.5X Premium
Joined 25 d ago
·
32 Posts
Yup. I wanted to use the baster method (we even had a vacuum pump at our disposal) but it was insisted that removing the hose would work best. I just want to fix and get rid of this lemon right now.
Q 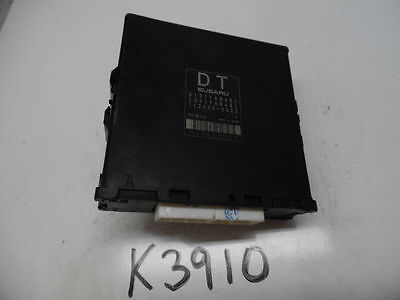 Also occurs to me that there are companies that will repair them which might be an option.
Q

To access yours you just need to remove the lower cover from the instrument panel and it is just to the left of the brake pedal. The service manual says to disconnect the battery before undoing the connections. Hope this is helpful.

Quadraria10 said:
Yup should be the right part

To access yours you just need to remove the lower cover from the instrument panel and it is just to the left of the brake pedal. The service manual says to disconnect the battery before undoing the connections. Hope this is helpful.
Click to expand...

If the TCM is in fact bad, then thank you so much for providing these links. I've saved them just in case - a lot cheaper than the $1500+ the shop quoted me. I'm hoping this hell will be over after replacing the TC lockup solenoid, this will be a good fallback in the worst case scenario. Since it's a computer I suspect it will need to be checked/programmed by the transmission shop, but I'll check with them to see if they allow for customers to provide parts... not many shops do.
Q

2011 Subaru Forester
Joined 8 mo ago
·
492 Posts
I suspect its plug and play. The service manual does not say anything about reprogramming it. Basically they seem to test and if defective replace. The TCM is attached by a bracket that you remove and transfer to the new one. A little contortion is involved but it would be a 10 minute job to replace it.

Quadraria10 said:
I suspect its plug and play. The service manual does not say anything about reprogramming it. Basically they seem to test and if defective replace. The TCM is attached by a bracket that you remove and transfer to the new one. A little contortion is involved but it would be a 10 minute job to replace it.
Click to expand...

What section of the shop manual did you find it in?

EDIT: How about "Transmission Control Module" that sounds right...

As a note, the procedure for installation requires a procedure called "Learning Control" that requires a Subaru Select monitor.. yeah I'll check with the shop to see if they allow for me to provide the part.
Q

2011 Subaru Forester
Joined 8 mo ago
·
492 Posts
I did not read attentively enough. That does complicate the replacement if needed. I wonder what it actually does, and if there is an aftermarket interface that will let you run Subaru Select?
21 - 33 of 33 Posts
Join the discussion
Continue with Facebook
Continue with Google
or sign up with email
About this Discussion
32 Replies
5 Participants
Last post:
Quadraria10 3 h ago
Subaru Forester Owners Forum
We’re the best Subaru Forester Owners Forum to talk about the best years of the Subaru Forester, modifications and reliability history of the Subaru Forester.
Full Forum Listing
Explore Our Forums
Problems, Maintenance, and Warranty Europe Interior and Electronics Members' Journals General Forum
Popular Communities