2011 Subaru Forester
Joined 5 mo ago
·
369 Posts
Hi all, I am looking for some information that I am hoping someone might share. I want to install a blockheater in my 2011 2.5, and am shocked that the Subaru dealer wants $260 Cdn for what is basically an electric kettle coil and element. Typically an aftermarket one ( and even some Subaru ones) are less than $50.
Not sure what kind of unobtanium Subaru uses in its electric cords, but they sure have a good markup on it.
What is confusing is that the XT versions use a different part, and for those I can find the Subaru part for $39. To my eye from the pics there is no difference other than the $260 has some flexible heat shielding. Kind of stuff you can buy for heating ducts very cheap and zip tie on, and that is probably overkill. Its not to be found on the ones for Turbo engines which I would think produces more heat than the normal aspirated engine.
Anyone have a good link to an aftermarket one that fits and is available for a reasonable price. I have found one but it concerns me that the model selector makes no distinction between a non turbo and a turbo 2011. The Subaru part number given to me at the dealer for mine is A091SSC000, it appears to have been superseded by a similar part number with GF instead of the SC.
Q

2011 Subaru Forester
Joined 5 mo ago
·
369 Posts
Just so people understand better. Here is a link to the block heater

It contain three images. The first the block heater with cord, the second the complete kit with it, and the third is actually A091SSC000.
or here below

Different from what the dealer part guy told me, subaruparts indicates this is the right one for mine, and they also indicate 2012 and 2103

I have been reading comments on aftermarket ones on Amazon which are like the last cheap subaruparts one says fits mine, but the two commonalities of people reporting difficulties in Subarus and particularly a Crosstreck and another Forester, who could not fit theirs because the connector sticks out too far, and the manifold interferes with plugging it in, and for others it seems to be early cord failure that is the issue.

On the updated part the image shows the cord is covered with heat shielding and a right angle connector, rather than a straight plug like one the old design. The heating element is also different but that won't make any difference as the specs are the same as the old design. However, the old one sticks out further from the engine block when installed. 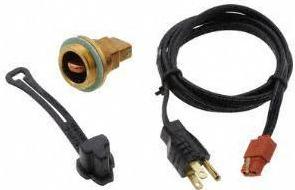 and replacing the cord with a right angle one 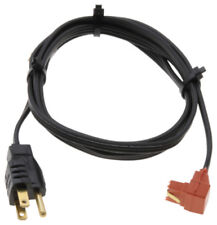 and then wrap it with this

So I could more or less recreate the new style for less than 100.00 rather than 259.80 +38.97 in taxes for a total of 290 CDN or so.
I sent a tech info request to Temro who makes the Zerostart block heaters asking if the replacement cord fit and also why they are no longer including Subaru in their catalog after.

Looking at the pics a little closer I think the replacement cord will fit the actual Subaru part. And observing further the new style would not stick out from the engine block as much, and also has the right angle connector that further limits how much it sticks out. I am wondering if this was to make installation simpler and possibly not require the manifold to be disconnected and the front of the exhaust dropped. I may have to do some searching to find a similar style 36mm one. Enough for now. I will report back when I learn anything further, and hopefully Temro lets me know about the connectors.
Q

2011 Subaru Forester
Joined 5 mo ago
·
369 Posts
If anyone wants to see what is involved for the job, here is a good video on a Crosstrek and it features the new style block heater and insulated cord with a right angle.

I may have to pay a mechanic to do my install as its rather cold out and I don't have an indoor garage.

I am surprised at how few members seem to work on their own vehicles. There does not seem to be much DIY info here for 2009 and up Foresters.
Q

2011 Subaru Forester
Joined 5 mo ago
·
369 Posts
Well maybe my question is answered, and there is no good aftermarket blockheater available.
Phillips & Temro who make the best ones wrote me the following:
''I would recommend you get the correct harness from your dealer.
We make that harness with a special high heat silicone specifically for Subaru.
It is specific to your car and the high heat in the engine compartment.''
Q

2011 Subaru Forester
Joined 5 mo ago
·
369 Posts
Well to finish this, my mechanic friend suggested that 0w20 helps the cold start ups and figures you don't really need a block heater with it. He suggests a battery warmer. It will help start up on really cold mornings, and its driving it more than anything that heats the car up. So I will get one.
Just found one at Canadian tire for 39.99, which has identical specs and the same part number on it as the genuine Subaru one

Its a Temro Zerostart-- same company that makes them for Subaru.
R

2003 EJ20K Forester
Joined May 27, 2016
·
324 Posts
You can also get an oil pan heater - basically a pad heating element that you glue to the oil pan. Downside is they tend to peel off after a few years and I'm not convinced they aren't hard on the oil by overheating it. This is often the only solution for some BMW's because there is no location for common block heater element. Other thing to watch out for on universal block heaters is element shape. Sometimes the coolant jacket is really shallow and if the element is too long it will touch or straight up interfere with the block. This is going to be the main reason for the high cost of the Subaru one - it likely has a special requirement for element shape, and/or Subaru has a special requirement for cord construction.

2011 Subaru Forester
Joined 5 mo ago
·
369 Posts
Guess it depends on how cold it gets, but my experience with using one, you would still need to drive the car for 5 to 10 minutes to get it up to Temp when its -20C overnight. Without one it will take a couple of minutes longer, but that is where heated seats are nice.
I am also under the impression that the layout of the engine vs a vertical block means its less oil deprived on startups, and 0w20 flows at very low temperatures. Being a cheapo I am getting the battery warmer for sure, and I will hold off on the 400+ to have a block heater installed at the dealer and instead invest it in a more modern head unit with a backup camera.
Q

2011 Subaru Forester
Joined 5 mo ago
·
369 Posts
Just wanted to post a follow-up, now that I have used the battery warmer a number of times when nighttime temps have gone below -20, it really works. The car starts great. I also like my new head unit and back up camera!
1 - 9 of 9 Posts
Join the discussion
Continue with Facebook
Continue with Google
or sign up with email
Recommended Reading
Read More
Read More
About this Discussion
8 Replies
3 Participants
Last post:
Quadraria10 2 mo ago
Subaru Forester Owners Forum
We’re the best Subaru Forester Owners Forum to talk about the best years of the Subaru Forester, modifications and reliability history of the Subaru Forester.
Full Forum Listing
Explore Our Forums
Problems, Maintenance, and Warranty Europe Members' Journals Interior and Electronics General Forum
Popular Communities