2010 Forester A
Joined Sep 2, 2018
·
24 Posts
Hi all, been reading through a few threads on head gaskets. There is less discussion in recent years so I am not sure what the current thoughts and ideas are on this long standing issue aside from it having slowly become less of a problem as the engine evolved. I have a 2010 NA with 104Km on it (Canada) and just noticed that it is starting to leak oil on the carport floor. Investigation appears to show that a leak of some kind is coming from the engine head on the drivers side, near where the exhaust exits the engine. (Apologies for steamed-hams descriptions, I'm not very mechanically minded) I am hopefully getting it in for a look this Friday at my mechanic but I am interested to know if this is likely a head gasket issue or possibly something else. When we bought this car just short of a year ago, I was given the impression that head gaskets weren't really a problem anymore (had a 2000 Outback in the past) and that we shouldn't need to worry about that. Some pictures attached show some of what I could see. I struggled to pull the camera far enough away for perspective so these are possibly useless... Any feedback or direction to quality thread with images greatly appreciated!!

Top image shows leaking mess from beside exhaust manifold down to the lowest point under the engine, where I jack it up at the front. Not sure what that's called, derp.


Next shot is closer in, again on the left is the exhaust manifold where it exits the engine.

Final shot another angle which better shows where the oil collects and finally drips to the next layer in the engine bay. The Square lug sticking out of the head of the engine covered in oil is again adjacent to the exhaust manifold bolt (out of focus here) 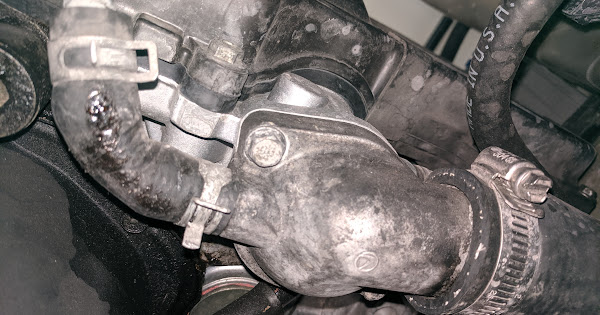 In case link does not work. Block is on the right with frost plug, exhaust is bolted into the head, valve cover is just left of the exhaust manifold bolt.

2010 Forester
Joined Feb 1, 2016
·
151 Posts
The head gaskets continued to be an issue in 2010. At 9 years in, you are due for the timing belt anyway, so why not take it to a reputable Subaru independent and have the whole thing done? That was the route I took anyway. I've done the timing belt myself before on a different Subaru (2003 which never needed head gasket work, go figure), but throw in head gaskets and all the duplicated work and I just took it in. I had them do the clutch at the same time since it was basically just the cost for parts at that point.

2010 Forester A
Joined Sep 2, 2018
·
24 Posts
Thanks @bman400 and @orndog Definitely looks like head gasket. Probably does make sense to do timing belt and anything else on the cards while that's happening.
B

cleangetaway said:
Thanks @bman400 and @orndog Definitely looks like head gasket. Probably does make sense to do timing belt and anything else on the cards while that's happening.
Click to expand...

Yup, I just had the same work done here as well, Head Gaskets and Timing Belt/water pump all at the same time. Found me a local independent shop in the DFW area. The engine is already out of the vehicle for the Head Gaskets, so the timing belt work was mainly paying for the parts, and maybe 30 mins of work for the timing belt. Sorry can't recommend anyone in the Vancouver area, it's been 20+ years since I lived there. Good luck.
B

bman400 said:
@cleangetaway Actually, the only guy I trusted and used when I did live there was: J Petersen in Burnaby. We had a 1992 Honda Civic at the time that needed a motor replaced.
Click to expand...

Thanks for the tips @bman400 . I spoke to my independent Subaru mechanic. He's done hundreds of head gasket jobs and has become pretty adept at it. Reading people's quotes for the work at $2-3k makes me shudder, but he's replacing the head gaskets and the timing belt for a grand. It's early stages so not urgent work, just annoying to have to waste the money on it!!
B

cleangetaway said:
Thanks for the tips @bman400 . I spoke to my independent Subaru mechanic. He's done hundreds of head gasket jobs and has become pretty adept at it. Reading people's quotes for the work at $2-3k makes me shudder, but he's replacing the head gaskets and the timing belt for a grand. It's early stages so not urgent work, just annoying to have to waste the money on it!!
Click to expand...

Sounds like you are in good hands. I was in your situation March of this year. She was leaking a bit of oil and coolant. Some coolant showing up in the oil. I paid $2800 for head gasket and timing belt/water pump. Including machined heads, new valve stem seals.

2010 Forester
Joined Feb 1, 2016
·
151 Posts
Yep, having the head work done added a chunk to mine as well, but since they're already off...
Plus mine is a 5 speed so I went ahead and had a clutch put in, not that it needed it but again, the engine is already out.

Forester 2003 Forester 2007
Joined Feb 1, 2020
·
61 Posts
I have 2007 Forester I bought 18 months ago with at the time 130 Km on the clock. In that time I've rustled up another 12K Km. I did post here a month or two ago. When I bought the car I was reassured the timing belt was done and there was no oil leaks.I since discovered someone had used silicone on the head join, drivers side left hand drive and now oil has appeared.
Anyone suggest a "Man in the Can" Product to stop this leak? I know it will be frowned upon. I really just want product suggestions.

2015 Forester 2.5i Limited CVT
Joined Mar 11, 2016
·
1,500 Posts
Be sure to use Subaru OEM MLS head gaskets, which are used on the Turbo model.
Gel all the seals replaced. Subaru or Aisin TB parts, thermostat and new Blue Subaru super coolant.
B